45x Greater Net Worth as a Homeowner

What do you do when you’re not working?When I'm not working I enjoy spending time with my wife and 4 kids, training muay thai, working out, playing ...

The Federal Reserve conducts a Survey of Consumer Finances in which they collect data across all economic and social groups every three years The latest survey, which includes data from 2010-2013, reports that a homeowner’s net worth is 36 times greater than that of a renter ($194,500 vs. $5,400).

The National Association of Realtors’ (NAR) Chief EconomistLawrence Yun predicted in a Forbes article, that by the end of 2016, the net worth gap will widen even further to 45 times greater.

The graph below demonstrates the results of the last two Federal Reserve studies and Yun’s prediction: 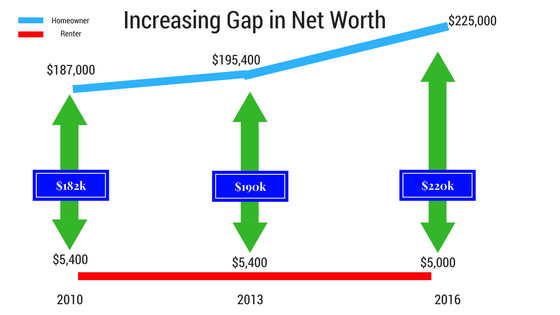 Put Your Housing Cost to Work for You

“Though there will always be discussion about whether to buy or rent, or whether the stock market offers a bigger return than real estate, the reality is that homeowners steadily build wealth. The simplest math shouldn’t be overlooked.”

SO WHAT DOES THIS MEAN?

If you are interested in starting to pay your own mortgage rather than your landlord's, let us set up a good time to guide you through the process.